Unic Press UK: The dust raised by Professor Chukuwma Soludo, the governor of Anambra State of Nigeria, when he retched unfounded allegations and criticised His Excellency Peter Obi, a former governor and foremost presidential candidate for the 2023 Nigeria election, may take a long time to douse. 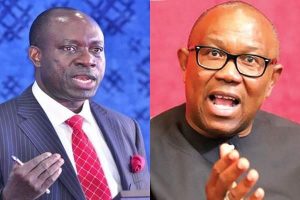 In a written disquisition, which many political analysts have viewed as full of bile and hatred, Soludo berated the Igbo race over what he described to be political miscalculations or decisions that portray the Igbo people as naive and disoriented in decision-making despite that the ethnic group is amongst the top three in Nigeria. Soludo also called into question the achievement of the Peter Obi administration in Anambra over 8 years (2006 -2014) in power.

The Excerpts from Prof Soludo’s long treatise ‘History Beckons and I will not be Silent (Part 1),’ which many people believe set out promoting narcissism inclination, personal interests, and executing a hatchet job for the ruling party, APC, read:

“Indeed, everyone recalls that both Tinubu and President Obasanjo disagreed politically, and probably still disagree—but none is being accused of being “anti- Yoruba”. Under Tinubu, the South-West strategically organized under a different political party, the ACN and went into a formidable alliance that kicked out a sitting president (in Africa?), and that alliance is not broken yet. Igbos, in their frenzied Nzogbu nzogbu politics, have sadly found themselves in a political cul de sac. Tragic indeed! When will my people smell the morning coffee? For example, people might differ as to the propriety of using taxpayers’ money to promote a company in which one is a shareholder in the name of “investment”, or even whether so called “savings” are warranted when there were dozens of schools without roofs or classrooms, or local governments without access roads or hospitals without doctors/nurses. A Bishop recently publicly advised that I should please try to construct the “Ngige type of quality roads”, stating that the ones done by his successor (that is, Peter Obi) had washed off, while Ngige’s remained. I worry that Ndigbo as Nigeria’s foremost itinerant tribe and with the greatest stake in the Nigerian project does not yet have a strategy to engage Nigeria—politically! Every four years, we resurface with emotive Nzogbu Nzogbu political dance (“it is our turn dance” but without organization or strategy) and fizzle out afterwards while others work 24/7 strategizing and organizing. Let’s be clear: Peter Obi knows that he can’t and won’t win. He knows the game he is playing, and we know too; and he knows that we know. The game he is playing is the main reason he didn’t return to APGA. The brutal truth (and some will say, God forbid) is that there are two persons/parties seriously contesting for president: the rest is exciting drama!”

There have been several reactions against Prof. Chukwuma Soludo’s diatribe. In a concise analysis of Soludo’s apparently despicable commentary, a former presidential candidate of the National Conscience Party (NCP) and Head Policy Positions of Movement for Fundamental Change, Engr. Martin Onovo, has this to say:

“We agree with Dr. Ngozi Okonjo-Iweala that ‘Soludo is not wise and lacks character.’ It was with Soludo as CBN Governor that many Nigerian banks became distressed. We lost about N5.6 trillion on that issue. Soludo has always been ultra-selfish and desperate. In his desperation, he has applied false criticism and false analysis. Peter Obi is clearly the best governor of the Fourth Republic. Soludo is an unrefined pro-establishment acolyte. His false criticism is inconsistent and self-contradictory. Soludo’s administration in Anambra has already started borrowing recklessly and unpatriotically. Soludo is unwise, rude and shameless. What sort of person is utterly treacherous, promoting hatred and lies in public against his own people?? Soludo is unwise and lacks good judgement. In 2015, he supported Gen. Buhari, an ethnic bigot and Islamic fanatic that was also the least educated, the oldest and the worst of the 14 candidates. Today, they have destroyed Nigeria with Islamization, insecurity and poverty. Soludo’s administration is presently over-taxing Anambra people, thereby destroying the future of the Youths and MSMEs for his ego trips. Mr. Val Ozigbo was clearly better, but Anambra people preferred party loyalty. Soludo is failing in government in Anambra State and will almost certainly destroy APGA. Let us not forget that Soludo was under EFCC investigation for a contract scam when he was CBN Governor. Soludo has finally confirmed that Dr. Okonjo-Iweala is right about him. It is not too late for him to correct his countless errors.”