Anap Foundation, 21 December 2022 – Ahead of the forthcoming 2023 Presidential elections, a recent nationwide opinion poll commissioned by Anap Foundation and conducted by NOI Polls Limited was concluded in early December 2022. The Poll revealed a significant lead by Mr. Peter Obi of the Labour Party (LP), with Asiwaju Bola Ahmed Tinubu of the All Progressives Congress (APC) and Alhaji Atiku Abubakar of the People’s Democratic Party (PDP) both trailing him. Dr. Rabiu Kwankwaso of the New Nigeria Peoples Party (NNPP) emerged as the lone outsider.

Mr. Peter Obi’s 10%-point lead at this stage is significant, but not sufficient to separate him from a leading pack of candidates scoring 13%, 10% and 2%.

Undecided voters and those who prefer not to reveal their preferred candidate add up to a whopping 29% and 23% respectively. The gender split of undecided voters shows that 38% of women are undecided versus 21% of male voters. 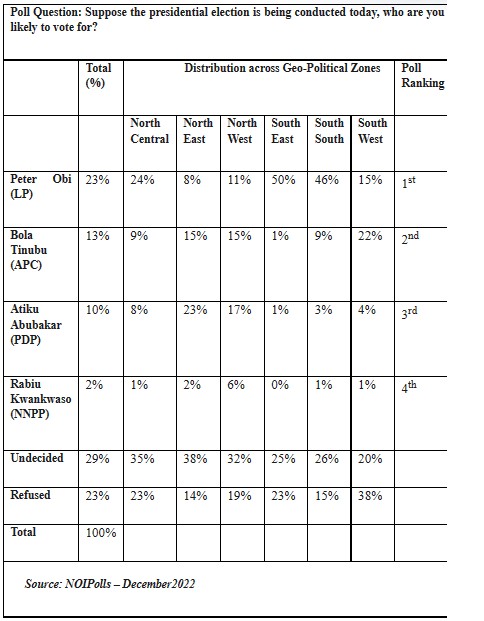 The percentage of registered voters and/or voters with their permanent voter’s card is as follows in each of the zones – 90% in the North East, 89% in the South West and 88% in the South South. The lowest voter registration percentages were recorded in the North Central with 87%, North West with 86% and the South East with 84%.

Furthermore, the data summarizes the top five reasons why voters are more inclined to vote in the forthcoming elections, these include: – The need to tackle insecurity (35%), Economy (26%), Unemployment (10%), Poverty alleviation (7%) and Education (6%).

71% of the respondents think the Presidential candidates should compulsorily participate in a televised debate and/or town hall meeting, with the debates/town hall meetings spanning across topics like their manifestos, competence checks, and personality recognition amongst others.

The Poll shows that almost 8 in 10 registered voters are absolutely certain that they would be voting in the next presidential election. If they stay committed then we could witness a huge turnout in the February Presidential 2023 elections.

While this Poll result shows some significant trends, it is key to note that the battle ahead lies in the hands of the undecided/swing voters as they would ultimately decide which candidate takes the lead to emerge as the President of the Federal Republic of Nigeria in the 2023 presidential elections.

This result was polled from 1,000 respondents; after which Anap Foundation conducted similar polls with a 2,000 and 3,000 respondents sample size, the difference in the results was not significant.

In summary, our December 2022 Polls are inconclusive in terms of establishing a clear winner as the undecided voters, combined with the voters who refused to disclose their preferences, are enough to turn the tables. However, Anap Foundation has concluded that the trends are clear enough to establish the front-runners and so our subsequent polls will continue to concentrate on the 4 leading candidates only.