BBC: The first drug to slow the destruction of the brain in Alzheimer’s has been heralded as momentous and historic.

The research breakthrough ends decades of failure and shows a new era of drugs to treat Alzheimer’s – the most common form of dementia – is possible.

Yet the medicine, lecanemab, has only a small effect and its impact on people’s daily lives is debated.

And the drug works in the early stages of the disease, so most would miss out without a revolution in spotting it.

Lecanemab attacks the sticky gunge – called beta amyloid – that builds up in the brains of people with Alzheimer’s.

For a medical field littered with duds, despair and disappointment, some see these trial results as a triumphant turning point.

One of the world’s leading researchers behind the whole idea of targeting amyloid 30 years ago, Prof John Hardy, said it was “historic” and was optimistic “we’re seeing the beginning of Alzheimer’s therapies”. Prof Tara Spires-Jones, from the University of Edinburgh, said the results were “a big deal because we’ve had a 100% failure rate for a long time”.

Currently, people with Alzheimer’s are given other drugs to help manage their symptoms, but none change the course of the disease.

Lecanemab is an antibody – like those the body makes to attack viruses or bacteria – that has been engineered to tell the immune system to clear amyloid from the brain.

Amyloid is a protein that clumps together in the spaces between neurons in the brain and forms distinctive plaques that are one of the hallmarks of Alzheimer’s. 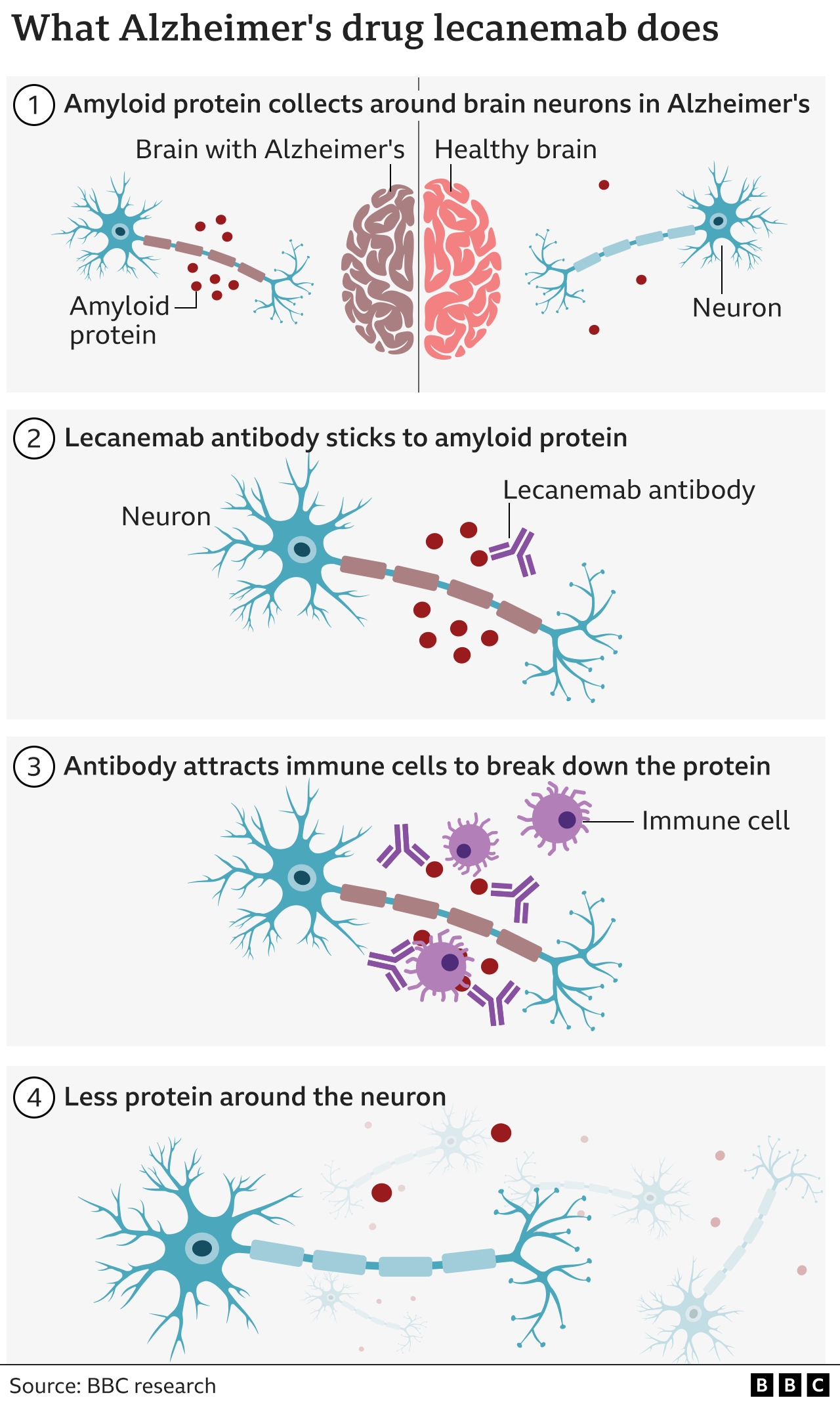 The large-scale trial involved 1,795 volunteers with early stage Alzheimer’s. Infusions of lecanemab were given every fortnight.

The results, presented at the Clinical Trials on Alzheimer’s Disease conference in San Francisco and published in the New England Journal of Medicine, are not a miracle cure. The disease continued to rob people of their brain power, but that decline was slowed by around a quarter over the course of the 18 months of treatment.

The data is already being assessed by regulators in the US who will soon decide whether lecanemab can be approved for wider use. The developers – the pharmaceutical companies Eisai and Biogen – plan to begin the approval process in other countries next year.

David Essam, who is 78 and from Kent in the UK, took part in the international trial.

His Alzheimer’s meant he had to give up work as a joiner – he could no longer remember how to build a cabinet or use his tools. He now uses a digital watch as he can’t tell time using a clock face.

“He’s not the man he was, he needs help with most things, his memory in general is almost non-existent,” said his wife Cheryl. But she said the trial had given the family hope.

David said: “If somebody can slow it [Alzheimer’s] down and eventually stop it all together that would be brilliant, it’s just a horrible nasty thing.”

There are more than 55 million people in the world like David and the numbers with Alzheimer’s disease are projected to exceed 139 million by 2050.

Will it make a difference?

There is debate among scientists and doctors about the “real world” impact of lecanemab.

The slower decline with the drug was noticed using ratings of a person’s symptoms. It’s an 18-point scale, ranging from normal through to severe dementia. Those getting the drug were 0.45 points better off.

Prof Spires-Jones said that was a “small effect” on the disease, but “even though it is not dramatic, I would take it”.

Dr Susan Kohlhaas, from Alzheimer’s Research UK, said it was a “modest effect… but it gives us a little bit of a foothold” and the next generation of drugs would be better.

There are also risks. Brain scans showed a risk of brain bleeds (17% of participants) and brain swelling (13%). Overall, 7% of people given the drug had to stop because of side effects.

A crucial question is what happens after the 18 months of the trial, and the answers are still speculation.

Slow that decline by a quarter and it could equate to an extra 19 months of independent life, “but we don’t know that yet”, she says.

It is even scientifically plausible that the effectiveness could be greater in longer trials. “I don’t think we can assume that this is it,” says Dr Kohlhass.

The emergence of drugs that do alter the course of the disease asks big questions of whether the health service is ready to use them.

The drugs have to be given early in the disease before too much damage to the brain is done, whereas most people referred to memory services are in the later stages of the disease.

That requires people coming forward at the earliest signs of memory problems and doctors being able to send them for amyloid tests – either brain scans or spinal fluid analysis – to a determine if they have Alzheimer’s or another form of dementia. At the moment only 1-2% of people with dementia have such tests.

“There’s an enormous gulf between current service provision and what we need to do, to deliver disease modifying therapies,” said Dr Coulthard.

She said that, currently, only those living near big medical centres or paying privately were likely to benefit.

Scientists also stressed that amyloid was only one part of the complex picture of Alzheimer’s disease and should not become the sole focus of therapies.

The immune system and inflammation are heavily involved in the disease and another toxic protein called tau is the one that’s found where brain cells are actually dying.

“That’s where I would put my money,” said Prof Spires-Jones.

She added: “I’m very excited we’re on the cusp of understanding enough to get a hold of the problem and we should have something that will make a bigger difference in a decade or so.”