Premium Times, Nigeria – Governor Nyesom Wike of Rivers State has defended his position and that of other four governors that make up the G5 that the National Chairman of the People’s Democratic Party (PDP), Iyorchia Ayu, should resign.

He said the presidential candidate of the PDP, Atiku Abubakar, gave a more severe condition to the then president and candidate of the party, Goodluck Jonathan, when he (Jonathan) approached Atiku for support before the 2015 elections. 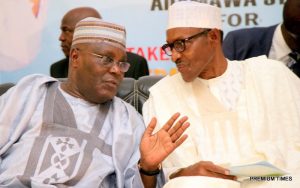 Mr Wike, who is leading the G5, disclosed this on Tuesday during the inauguration of the Akpabu-Itu-Umudiogha Road built by his administration.

The project inauguration which was performed by Governor Dave Umahi of Ebonyi State was streamed live on Channels TV’s Facebook page.

The Rivers State governor said Mr Jonathan travelled to Dorchester Hotel in London in 2015 to meet Atiku but that the former vice president “embarrassed” him, asking the former president to relinquish his presidential ticket to him (Atiku).

“We forget history. In 2015, when Jonathan as a sitting president, (not just the PDP presidential candidate), when he had won his primary, went to London to Dorchester Hotel to plead with Atiku Abubakar to come back to the party and support him.

“You know the condition he (Atiku) gave Jonathan? He should relinquish his ticket not to run as the president of Nigeria. That was the presidential candidate of a ruling party. He gave him (Jonathan) a condition, telling him to relinquish that ticket.

Atiku is the PDP presidential candidate for the 2023 election.

He was a presidential aspirant of the PDP for the 2015 election, but was defeated by Mr Jonathan during the party’s presidential primary.

Mr Jonathan, however, lost the election to the candidate of the All Progressives Congress, Muhammadu Buhari.

The G5 came about after Atiku defeated Mr Wike and others to become the PDP presidential candidate for the 2023 election.

The group has been demanding the resignation of the PDP National Chairman, Iyorchia Ayu, to pave the way for a southerner to lead the party in order to achieve a “regional balance”.

The governors’ argument is that both Mr Ayu and Atiku hail from northern Nigeria.