3 March 2022. BBC: African diplomats were divided at the UN General Assembly, which has adopted a resolution deploring Russia’s invasion of Ukraine and calling for the immediate withdrawal of its forces.

Eritrea was one of only five countries in the world that voted against it in the rare emergency session following more than two days of debate.

Its UN mission said that while it respected a country’s territorial integrity and sovereignty, it wanted windows for diplomacy to remain open. The country opposed all forms of unilateral sanctions as “illegal and counterproductive” as Eritrea had been subject to such sanctions by the West for two decades and they only “hurt innocent people and undermine the road to peace”.

Out of 54 nations on the continent, 28 voted in favour – but a large chunk, 17 countries, abstained from the vote.

These included the Central African Republic (CAR) and Mali, where Russian mercenaries and troops are helping the governments fight insurgencies.

Uganda said it had abstained to uphold its “neutrality” as the incoming chair of the Non-Aligned Movement (Nam), a forum of 120 developing countries set up to stop their members becoming pawns in Cold War power games.

When the EU ambassador to South Africa queried on Twitter why South Africa had abstained, Clayson Monyela, South Africa’s head of public diplomacy, accused the bloc of having double standards, saying it should also condemn other aggressors in the Palestinian territories, Yemen, Syria, Libya and Somalia.

Eight countries – including two that have recently witnessed coups, Burkina Faso and Guinea – did not vote at all.

Ethiopia, where a civil war has raged since November 2020 that has involved Eritrean soldiers fighting alongside Ethiopian troops, also did not vote. Prime Minister Abiy Ahmed tweeted that his country was closely following events: “We urge all parties to exercise restraint in the #Ukraine crisis.”

“Our tragic historical past as a global community coupled with the vast leaps and advancements we made in the 21st Century beckon a more nuanced approach in our international relations and diplomacy… Let not the failure of diplomacy be the reasons millions of lives are uprooted and global shock waves felt when the tools of creating international harmony are within our means,” he said. 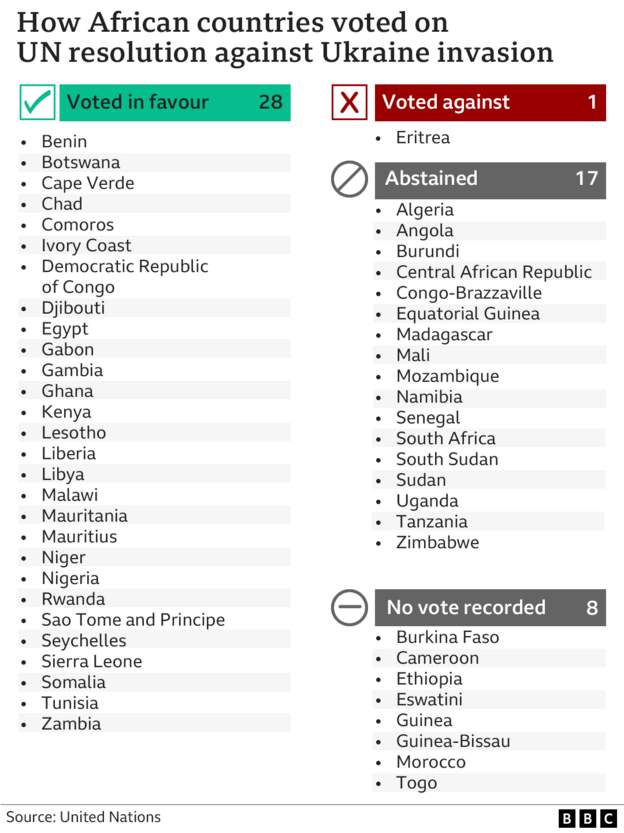