5 December 2021. BBC: The latest travel rule changes are “a case of shutting the stable door after the horse has bolted,” a scientist advising the government has said.

Prof Mark Woolhouse said the new rules had come “too late” to make a “material difference” to a potential wave of the Omicron variant in the UK.

The changes include pre-departure tests for people arriving in the UK and Nigeria going on the travel red list.

No 10 said the changes were due to a rise in travel-linked Omicron cases.

From 04:00 GMT on Tuesday travellers aged 12 and over will be required to show proof of a negative PCR or lateral flow test taken no earlier than 48 hours before departure.

Nigeria will also be added to the travel red list of countries from Monday, which means UK or Irish nationals, or UK residents returning from the country must quarantine in a hotel for 10 days.

But the latest changes have been described by the travel industry as a “hammer blow”, with the Business Travel Association warning livelihoods would be “devastated”.

Deputy Prime Minister Dominic Raab accepted the latest measures might “upset or disrupt” some people, but insisted it was right for ministers to take “incremental steps” early to avoid “bigger disruption” to travel and the economy.

Prof Woolhouse, a member of the government’s Scientific Pandemic Influenza Group on Modelling (Spi-M), told the BBC’s Andrew Marr that while imported cases of the Omicron variant were “important”, community transmission of the variant would be the driver of a next wave.

He added the numbers of UK Omicron cases were currently “quite small” and he strongly suspected the absolute number was “more in the hundreds than the thousands”.

But he warned Omicron was “spreading pretty rapidly” in the UK, and if current trends here and in South Africa continued in the coming weeks and months, it could even replace the Delta variant around the world. 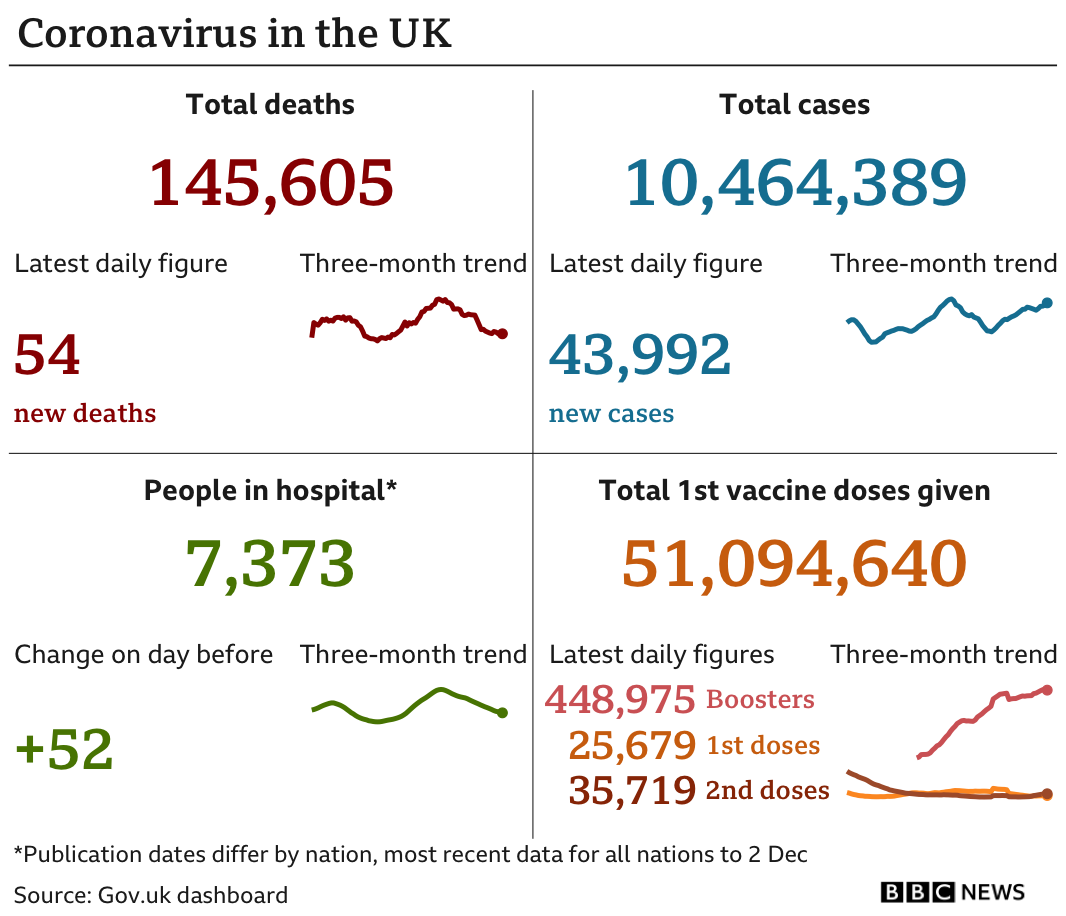 Asked about Prof Woolhouse’s comment the new restrictions had come too late, Mr Raab said there would always be “Goldilocks criticism that we’ve done too much or we’ve done too little”.

He said ministers would stay “eternally vigilant” to the risks associated with the Omicron variant and that measures, including adding countries to the travel red list, were intended to prevent its “reseeding” in the UK.

Citing this week’s drop in the number of Covid hospital admissions and deaths and the “success” of the vaccination rollout, he said: “We have steadily and steadfastly created the resilient defences which means we can enjoy Christmas.”

But Dr Katherine Henderson, president of the Royal College of Emergency Medicine, said hospitals were already struggling to cope because of winter pressures, and warned the NHS would be in a “very, very difficult position” if the new variant led to a surge in hospital admissions.

It comes as the UK Health Security Agency reported on Sunday a further 86 cases of the Omicron variant across the UK, taking the total so far to 246.

Scientists have raised concerns the heavily-mutated variant may be more transmissible than the dominant Delta strain and be able to escape immunity from vaccines.

‘I don’t think people have certainty any more

Denis Mclean has booked a holiday to Tenerife leaving on 27 January but he’s thinking about cancelling because of the new rules.

“When they announced we’d have to have a PCR test on the way back within two days, I thought that’s manageable.

“But now they want you to do another one 48 hours before you return and it’s just the extra cost.”

He says he’s worried about the rules changing again if they do actually go, but also concerned about rebooking for a later date due to the uncertainty.

“We’ve waited over two years to have another holiday, and I know there are more important things in life but we gave them up in the pandemic because that’s what you had to do,” he says.

“Sure, variants come along and we’ve got to tackle that, but I don’t think people have certainty any more and it’s a shame.”

Former Prime Minister Tony Blair has called for a new global set of travel rules to encourage countries to continue sequencing Covid variants without fear of facing a travel blacklist.

He told BBC Radio 4’s The World This Weekend: “What you will find is as this proceeds, and as we realise that you’re going to have to have proof of vaccination that’s credible and authentic, if you don’t have agreed set of standards and agreed sharing of data, it’s going to be much, much harder to get the global economy moving again.”

Travel industry bosses said they had not been given sufficient warning of the travel rule changes.

Clive Wratten, chief executive of the Business Travel Association, said: “The introduction of pre-departure testing with little warning is a hammer blow to the business travel industry.”

“Public safety is a priority, but businesses will fail, travellers will be stranded and livelihoods devastated by the lack of coherent plans from government,” he added.

Airlines UK said the change was a “premature” move that would “hit industry and passengers before we see the full data” on the effect of the Omicron variant.

The trade body added that previous experiences showed “blanket restrictions do not stop the importation of variants”, adding the variant was “already here”.

Travel association Abta called for the government “to step up to save jobs and businesses” and for the cost of PCR tests to be reduced.

Currently, travellers need to self-isolate until they test negative within two days of arriving into the country.

The government has said the change to the rules followed new analysis from the UK Health and Security Agency that indicated the window between infection and infectiousness may be shorter for the Omicron variant.

This increases the effectiveness of pre-departure testing as it is more likely to identify positive cases before travel, the government added.

Covid cases have been rising in the UK since the beginning of November, with 43,992 recorded on Sunday.

However, deaths and hospital admissions are falling. The UK recorded 54 deaths within 28 days of a positive test on Sunday, although the number of deaths recorded over the weekend tend to be lower because of reporting delays.