23 November 2021. BBC: Ethiopia’s prime minister has said he will go himself to the front line to face rebels who are reported to be inching closer to the capital as civil war rages on.

Abiy Ahmed, who won the Nobel Peace Prize back in 2019, implied that Ethiopia’s very existence was at stake.

The year-long conflict with rebels from the Tigray region has led to a humanitarian crisis.

Hundreds of thousands are facing famine-like conditions in the north.

Thousands of people have been killed and millions forced from their homes.

“Starting tomorrow, I will mobilise to the front to lead the defence forces,” Mr Abiy said in a post he shared on social media on Monday evening.

“Those who want to be among the Ethiopian children, who will be hailed by history, rise up for your country today. Let’s meet at the front,” he added.

The prime minister has the rank of lieutenant colonel in the army and fought in the 1998-2000 border war between Ethiopia and Eritrea.

He won the Nobel prize in 2019 after finally ending nearly two decades of tension that continued after the war by signing a deal with Eritrea.

The Ethiopian government has denied this. The tone of the prime minister’s speech carried both an air of defiance, and, to some, of desperation, reports the BBC’s Africa correspondent Andrew Harding.

The TPLF has dismissed Mr Abiy’s statement with its spokesperson, Getachew Reda, saying that “our forces won’t relent on their inexorable advance towards bringing [Abiy’s] chokehold on our people to an end”.

Nobody expected the prime minister to say he was ready to go to the front. And now he is talking about the price of freedom being “paid with blood”.

In his call for Ethiopians to meet him at the front, the prime minister was clearly trying to mobilise public opinion but he may also be seeking to encourage new recruits.

For some time, the federal and regional governments have been urging citizens to arm themselves. There has also been the admission from the authorities that the armed forces cannot defeat the TPLF alone.

Now the prime minister appears to want more people to fight with him.

He is not new to the battlefield so his military experience may be useful, but he will also be hoping to boost the army’s morale.

The African Union is leading efforts to find a negotiated end to the fighting, but neither side has committed to talks.

Earlier this month, US Secretary of State Anthony Blinken warned that out-and-out conflict would be “disastrous for the Ethiopian people and also for others in the region”.

At the root of the war is a disagreement between Prime Minister Abiy and the TPLF, which for almost 27 years dominated the whole country, not just Tigray.

Mr Abiy came to power in 2018 and in a whirlwind of reform, in which he liberalised politics and made peace with long-time foe Eritrea, the TPLF was sidelined.

The simmering dispute between the TPLF and Mr Abiy then erupted into war 12 months ago when Tigrayan forces were accused of attacking army bases to steal weapons and the federal government responded. 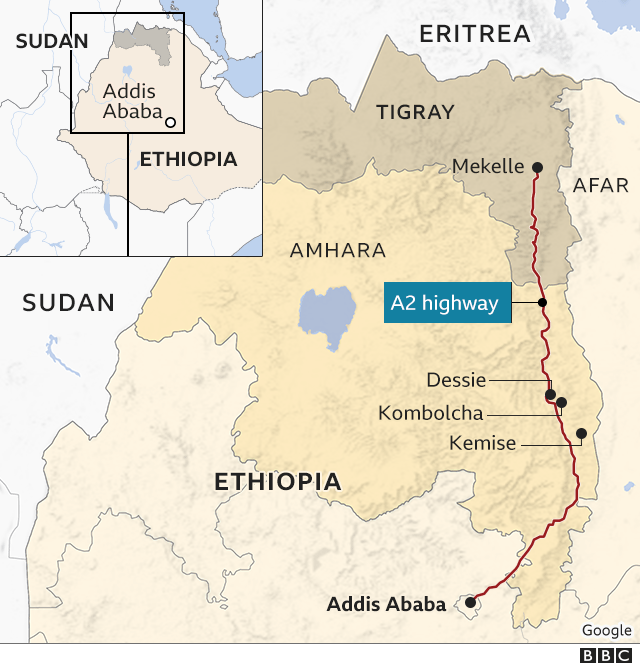