Fuel prices are averaging above $3.40 a gallon, according to the American Automotive Association, which forecasts more than 48 million Americans are likely to hit the road next week to drive to Thanksgiving celebrations.

“The bottom line is this: gasoline prices at the pump remain high, even though oil and gas companies’ costs are declining. The Federal Trade Commission has authority to consider whether illegal conduct is costing families at the pump. I believe you should do so immediately,” Biden wrote in a letter to FTC Chair Lina Khan.

High gas prices can pose a big political problem for the president as a new ABC News/Washington Post poll shows 70% of those surveyed rate the economy negatively, including 38 percent who say it is in “poor” condition. About half of Americans overall and political independents blame Biden for fast-rising inflation.

The administration had previously asked the commission to monitor the gasoline market for any illegal conduct earlier this year, leading to the FTC increasing their oversight on mergers of oil companies that result in fewer options for consumers.

Biden argues the math doesn’t add up when it comes to pricing, noting that while the price of unfinished gasoline (for example, before ethanol and other liquids are added) has been down more than 5% in the last month, prices at the pump are up 3%. Usually, the prices for unfinished gas correlates with what is used to fill up car tanks, he said.

“The unexplained large gap between the price of unfinished gasoline and the average price at the pump is well above the pre-pandemic average. Meanwhile, the largest oil and gas companies in America are generating significant profits off higher energy prices,” Biden wrote.

“I do not accept hard working Americans are paying more for gas because of anti-competitive or otherwise potentially illegal conduct. I therefore ask the commission to further examine what is happening with oil and gas markets, and that you bring all the commission’s tools to bear if you uncover any wrongdoing,” he added.

Biden’s call for a probe is not likely to lead to any immediate relief at the pump.

“This is a distraction from the fundamental market shift that is taking place and the ill-advised government decisions that are exacerbating this challenging situation. Demand has returned as the economy comes back and is outpacing supply,” said Frank Macchiarola, API’s senior vice president of policy, economics and regulatory affairs.

“Rather than launching investigations on markets that are regulated and closely monitored on a daily basis or pleading with OPEC to increase supply, we should be encouraging the safe and responsible development of American-made oil and natural gas,” he added.

The administration has been pressed in recent weeks about how Biden planned to address the soaring costs of fuel Americans are feeling at the pump, with many particularly wondering if the he planned to tap into the Strategic Petroleum Reserve to alleviate some of the price spike.

The administration largely stayed mum on specifics, arguing instead there were a range of options they were considering to address the issue.

“The message to Americans is that we’re not just closely and directly monitoring the situation, which of course we’ve been doing, but we’re looking at every tool in our arsenal,” Psaki told reporters Nov. 12. “The president is quite focused on this as is the economic team.”

Biden’s letter came as he headed on Wednesday to a General Motors plant in Detroit, Michigan, to push electric cars and to tout billions of dollars in the new infrastructure law for charging stations across the country. 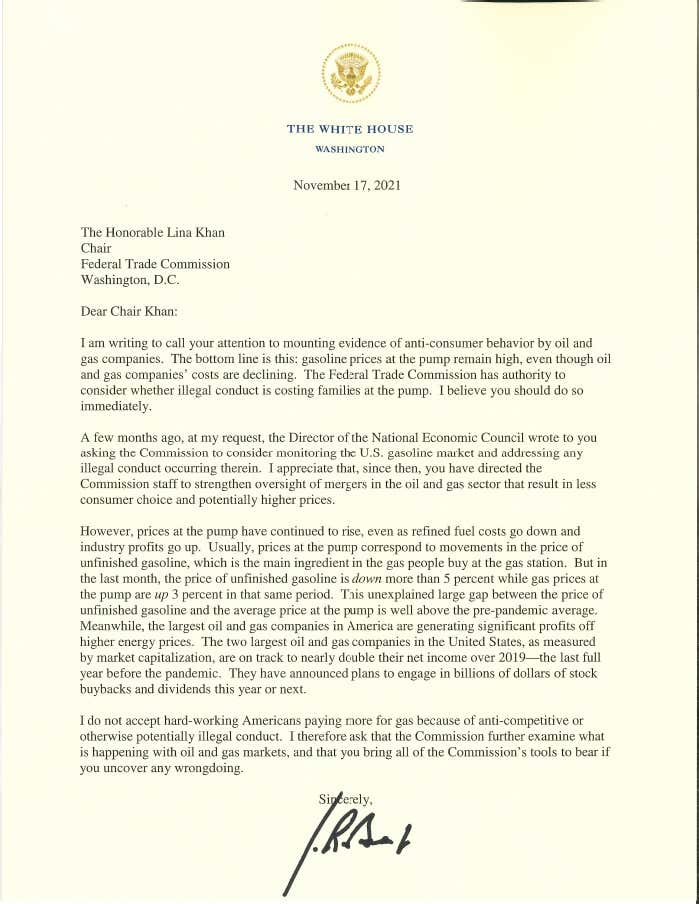