The Guardian, UK: Matt Hancock has resigned as health secretary after Tory MPs, ministers and grassroots Conservatives defied Boris Johnson and demanded he be dismissed from the government.

The minister fell on his sword after a day that began with senior Tories observing a deliberate silence over Hancock’s future – seemingly to test public opinion in their constituencies – before many later broke ranks to insist he had to go.

It is understood that Hancock had been considering resigning since Friday after his apology for kissing his closest aide, Gina Coladangelo, in his ministerial office – in breach of his own Covid-19 rules – failed to quell public outrage.

The resignation is a massive blow to the authority of the prime minister, who had stood by the 42-year-old following his apology, declaring the matter to be “closed”.

In his resignation letter Hancock said: “We have worked so hard as a country to fight the pandemic. The last thing I would want is for my private life to distract attention from the single-minded focus that is leading us out of this crisis. I want to reiterate my apology for breaking the guidance, and apologise to my family and loved ones for putting them through this. I also need [to] be with my children at this time.”

In his letter he praised the “dedication and courage of the NHS staff” but failed to mention staff who work in social care.

Johnson said in his reply that he was sorry to lose Hancock and that he “should leave office very proud of what you have achieved – not just in tackling the pandemic, but even before Covid-19 struck us”. But Johnson appeared to offer a way back to government. “I am grateful for your support and believe that your contribution to public service is far from over.”

Labour leader Keir Starmer said Hancock was “right to resign. But Boris Johnson should have sacked him”.

Last night Sajid Javid, a former chancellor and home secretary, was announced by Downing Street as his replacement. Javid quit as chancellor in February last year – the prime minister had ordered him to fire his closest aides and replace them with advisers chosen by No 10 if he wanted to remain in post. 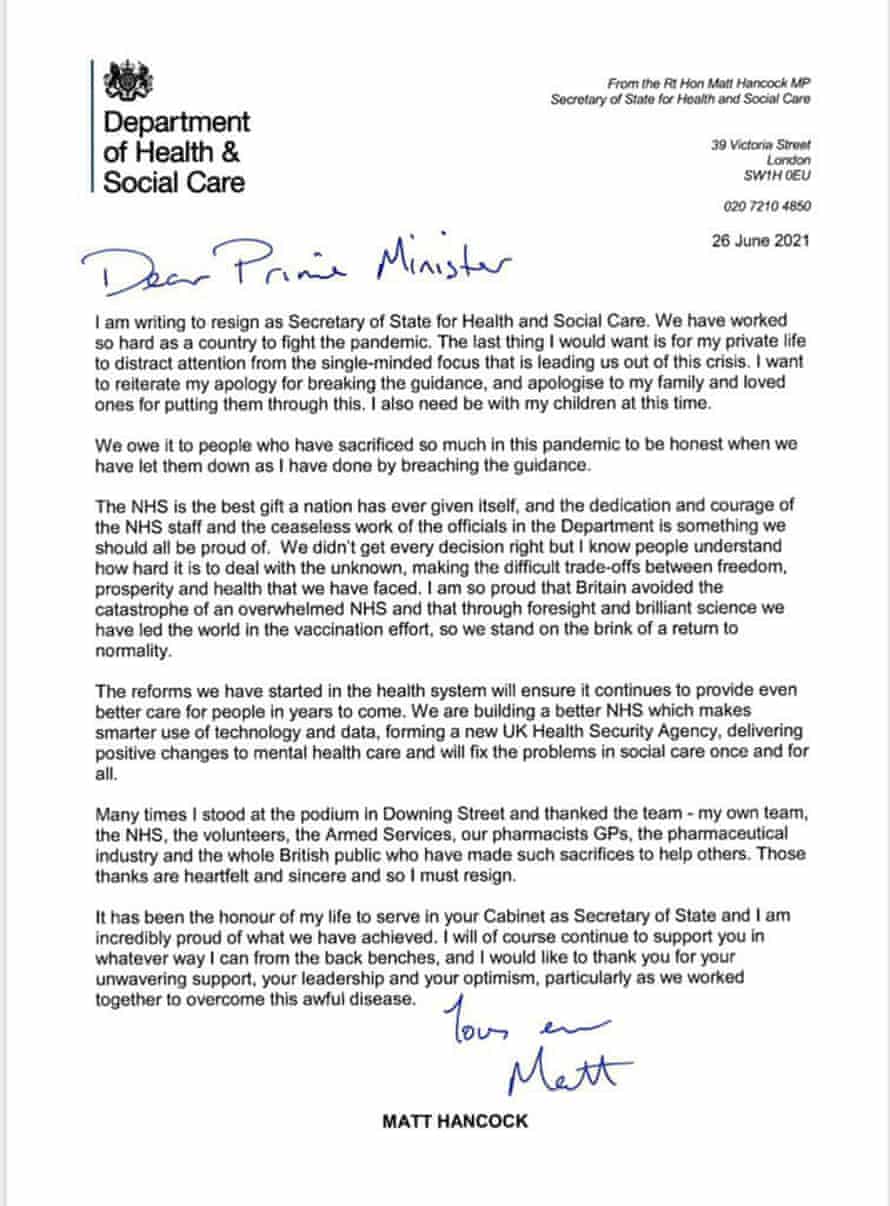 It was becoming increasingly clear from early yesterday that Hancock’s position was untenable and that Johnson’s defence of him was creating an angry public mood. There were also reports that Hancock had told his wife of 15 years on Thursday night that he was leaving her. Before the story of his affair was reported in the Sun, Martha Hancock is said to have been unaware of it.

It is understood that Coladangelo is also leaving her role as a non-executive director of the health department, following a series of questions about how she secured the role and her influence within Hancock’s office.

Yesterday it emerged Hancock had this month traveled to Oxford with Coladangelo for a G7 meeting of health ministers. Sources confirmed that the Department of Health and Social Care – and therefore the taxpayer – paid the costs.

There had been claims that Hancock would face a police investigation. But minutes after Hancock resigned, the Metropolitan police reiterated its position that he would not be investigated by the force over any alleged Covid breachings.

The Met said that the force’s initial stance when news of his tryst with his aide broke on Friday had not changed and that it would not be launching retrospective investigations into such offences.

Hancock faced a fresh investigation last night after it was claimed that he used a personal email account to conduct vital Department of Health business, including negotiating ­multimillion-pound Covid contracts. Senior health officials had previously warned about Hancock’s conduct, saying that he “only” deals with his private office “via Gmail account”.

The health secretary was given an official email account, but it was reported that he preferred to use his personal one. The practice, in contravention of official guidelines, means officials may not have a complete record of government dealings prior to and during the pandemic.

Officials can request access to ministers’ personal email accounts, but require “substantial” reasons for doing so. Such requests are rare. Any granted request would involve the minister going through their own personal inbox and being allowed to decide what to disclose, rather than handing it over to officials to decide.

Hancock’s private email usage means officials will struggle to obtain evidence of his conduct in office before an independent inquiry into the government’s handling of the coronavirus pandemic.

His email account will also help determine any conflicts of interest in appointing Coladangelo.

Meanwhile Tory MPs said they had spent the past 24 hours being bombarded with furious complaints from constituents. Veteran Tory MP Sir Christopher Chope said his constituents were “seething” and his party association had voted unanimously to call on Hancock to resign immediately, which he felt reflected the mood of the public. 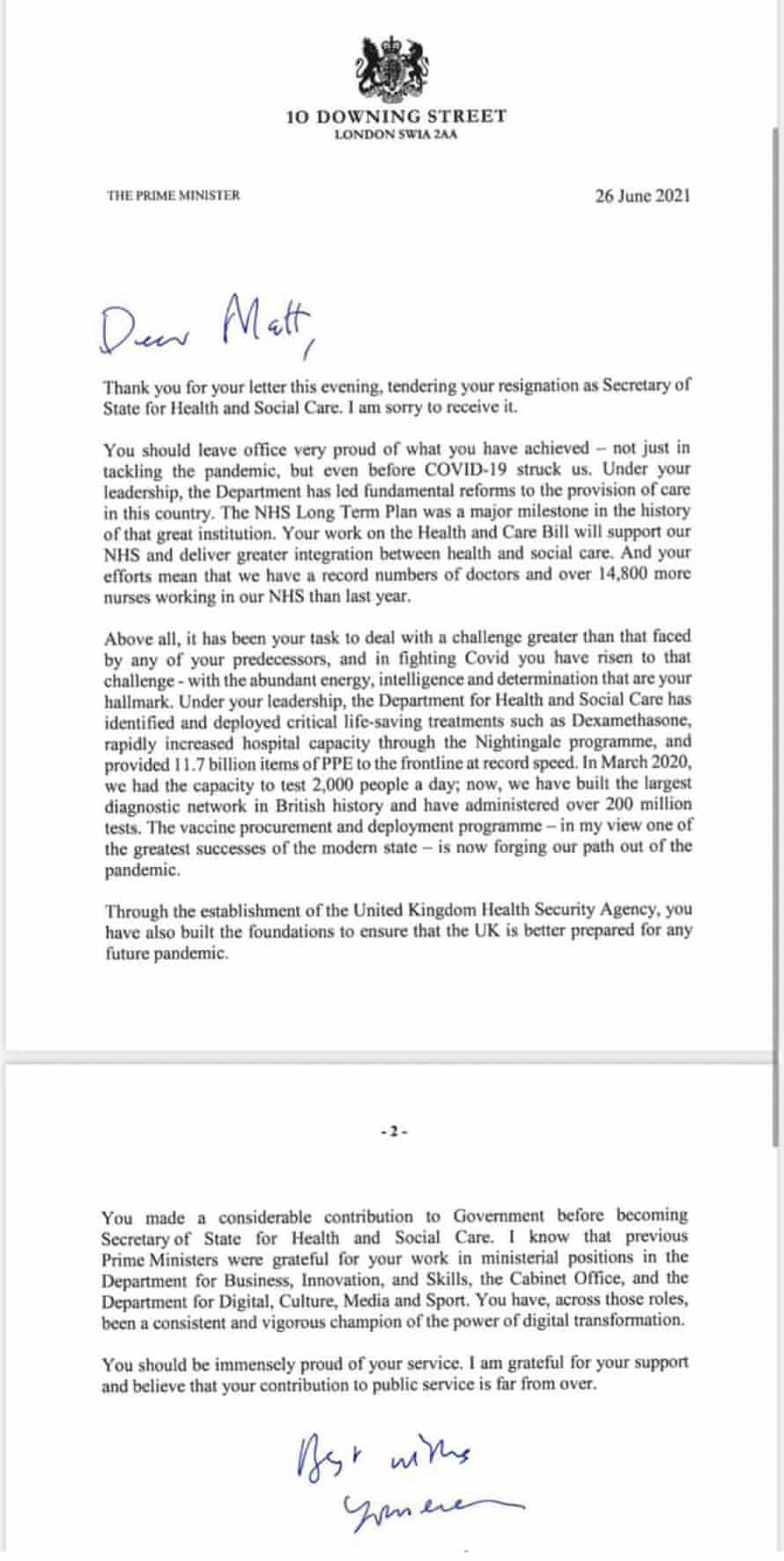 The Observer has been told that Hancock took part by Zoom in the annual meeting of his West Suffolk Conservative Association on Friday evening, talking about the vaccination programme and local issues but refusing to take any questions about his rule-breaking or relationship with Coladangelo, whom he has known since university days at Oxford.

The front page headline in his local newspaper, the Eastern Daily Press, yesterday said: “A Complete and Utter Hypocrite”.

North Norfolk MP Duncan Baker told the paper: “In my view, people in high public office and great positions of responsibility should act with the appropriate morals and ethics that come with that role. Matt Hancock, on a number of measures has fallen short of that.” Asked whether Hancock should therefore resign, Baker responded: “Yes”, before adding “and I have said that to the government”.

Hancock had been due within days to put before parliament a bill on the future of the NHS that would concentrate more powers in his own hands and also to make announcements about Covid data and easing of restrictions.