9 February 2021. BBC: Travellers having to stay in quarantine hotels in England will be charged £1,750 for their stay, Health Secretary Matt Hancock has announced.

The measures, which come into force on Monday, apply to UK and Irish residents returning from 33 red list countries.

Those who fail to quarantine in a government-sanctioned hotel for 10 days face fines of up to £10,000.

Meanwhile, all travellers arriving into Scotland from abroad by air will have to go into quarantine hotels.

People travelling from red list countries to Wales and Northern Ireland will be required to book and pay for quarantine in England, as neither destination currently has any direct international flights.

Travellers arriving into England who lie on their passenger locator forms about visiting a red list country face a fine of £10,000 or up to 10 years in jail.

It comes as the UK reported another 12,364 confirmed cases of coronavirus and a further 1,052 deaths within 28 days of a positive test – bringing that total to 113,850. More than 12.6 million people have received a first dose of the vaccine.

Delivering a statement in the Commons, Mr Hancock said 16 hotels have been contracted for the programme, with 4,600 rooms secured.

The health secretary also confirmed a new “enhanced testing” regime for all travellers arriving into the UK would begin on Monday, with two tests required during the quarantine process.

They will be required to get a test on days two and eight of their 10-day quarantine period, whether they are isolating at home or in a hotel. The tests, conducted by NHS Test and Trace, will cost travellers £210.

“People who flout these rules are putting us all at risk,” the health secretary told MPs.

Airlines and travel companies will be legally required to make sure travellers have signed up for the new measures before they depart, with fines for companies and passengers if they fail to comply, he said.

Asked when the travel rules would be relaxed, Mr Hancock said: “We want to exit from this into a system of safe international travel as soon as practicable and as soon as is safe.” 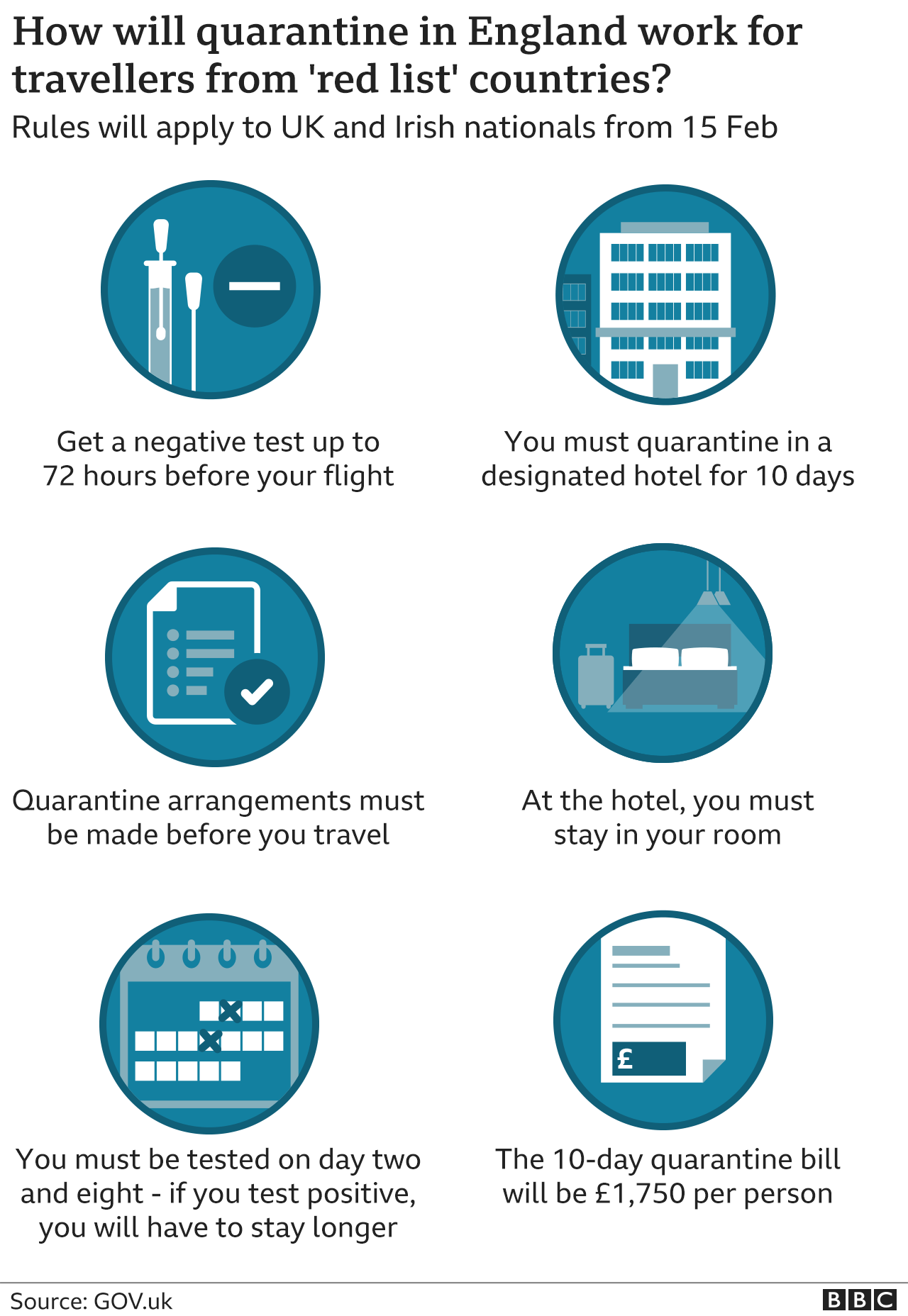 Passengers required to stay in a quarantine hotel will need to reserve a room online in advance using a booking system that opens on Thursday.

These travellers will only be allowed to enter the UK through a “small number of ports that currently account for the vast majority of passenger arrivals”, Mr Hancock added.

Jonathan Ashworth told the Commons: “Our first line of defence is surely to do everything we can to stop (new variants) arising in the first place. That means securing our borders to isolate new variants as they come in.

“He’s announced a detailed package today but he hasn’t announced comprehensive quarantine controls at the borders.”

Announcing Scotland’s tougher measures, which apply to arrivals from all countries, Scottish Transport Secretary Michael Matheson said the “targeted, reactive approach” of the UK government was “no longer sufficient” to deal with the threat from coronavirus.

Welsh First Minister Mark Drakeford said he also wanted to see “a stronger set of defences at our borders” and said the UK government’s measures were “the bare minimum of what needs to be done”.

Enforcement fines and prison sentences over quarantine breaches are still “under review” in Wales. A Welsh government spokesperson also said the country was working to determine when it will need its own quarantine hotels, if the red list expands or if international flights resume.

Although the 4,600 rooms secured so far in England would only allow for around one Boeing 747’s worth of passengers per day, Kate Nicholls, chief executive of UK Hospitality, said discussions were under way to add more capacity.

She told BBC Radio 4’s World at One that separate security teams contracted by the government would be responsible for enforcing the quarantine, while hotel staff focused on giving people the “best possible experience in what are very difficult circumstances”.

The £1,750 fee includes three meals, tea, coffee and water, Ms Nicholls said, but other items will be available at an extra cost through room service. 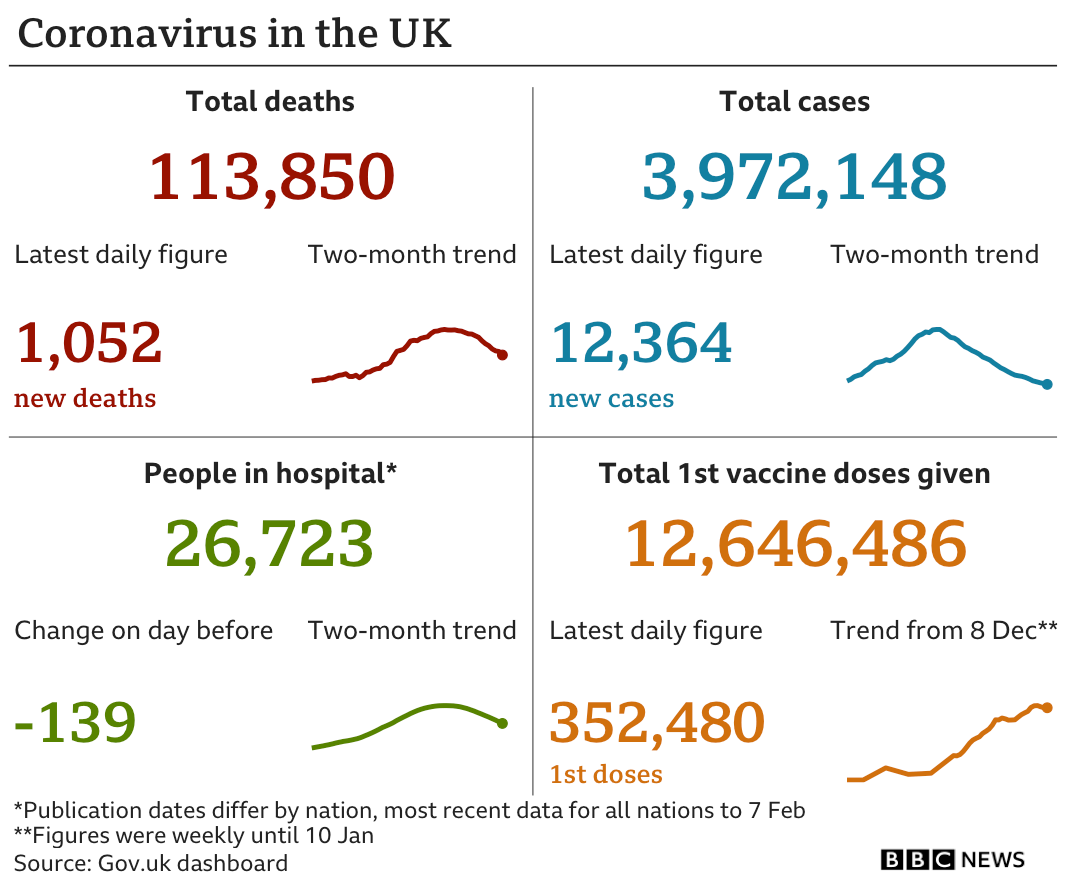 ravellers arriving in the UK – whether by boat, train or plane – are already required to show proof of a negative Covid-19 test to be allowed entry.

This test must be taken in the 72 hours before travelling, and anyone arriving without one faces a fine of up to £500, with Border Force officials carrying out spot checks.

They must also provide contact details and their UK address. They can then travel – by public transport if necessary – to the place where they plan to self-isolate.

All travellers – including British nationals – must self-isolate for 10 days when they get to the UK.

The “test to release scheme” – where travellers from non-red list countries can leave home isolation after a negative test on day five – will remain under the new testing rules.

Passengers will be expected to use the gold-standard and more expensive PCR tests.

Lockdown rules mean people must only travel abroad for essential reasons. These are the same as the “reasonable excuses” for domestic travel, including:

People leaving England will soon have to make a declaration on why they need to travel, which will be checked by carriers prior to departure.

The new measures come after England’s deputy chief medical officer, Prof Jonathan Van-Tam, warned it was too soon to say to what extent people could begin to start planning summer holidays.

Speaking at Monday’s Downing Street coronavirus briefing, he said: “The more elaborate your plans are for summer holidays, in terms of crossing borders, in terms of household mixing, given where we are now, I think we just have to say the more you are stepping into making guesses about the unknown at this point,” he said.

“I can’t give people a proper answer at this point because we don’t yet have the data. It is just too early to say.”

After the announcement of the travel rules, aimed at preventing the spread of new variants of coronavirus, government advisers designated another “variant of concern” – a version of the virus which was revealed last week to have been found in Bristol.

It’s not surprising that officials are adding this new version of coronavirus to their “variants of concern” list.

Targeted testing is already under way to spot any new cases linked to the 21 that have already been found, mostly in the south west of England.

This new incarnation of the virus is the Kent variant “plus”. It has the same N501Y mutation as the one that triggered lockdown – a genetic change that scientists say lets the virus spread more easily. But it also has an extra mutation called E484K.

E484K is what experts are worried about for vaccine efficacy. It is also seen in the South Africa and Brazil variants of concern.

A cluster of another variant in Liverpool is different again. It has got the E484K mutation but is an iteration of an earlier version of the pandemic virus rather than the Kent one.

Inevitably, more variants will continue to emerge. The challenge is to make sure vaccines are a good match to keep us ahead in this race against the virus.