Unic Press UK: Nigeria’s Inspector-General of Police, M.A Adamu, has ordered the immediate mobilization of all police operational assets/resources as the law enforcement agents try to bring an end to widespread violence, looting and destruction of property across the country.

In a statement Saturday, Adamu, through the NPF public relations officer, DCP Frank Mba, directed his men [all the Assistant Inspectors General of Police (AIGs), Commissioners of Police (CPs), Heads of Police Operational Units, Squadron and Base Commanders in charge of Zonal/State/FCT Commands, the Police Mobile Force, Counter Terrorism Unit, Heads of Police Formations, and the Special Protection Unit] to “dominate the public space and ensure peace and safety”.

The Police order comes as thousand of people roam the streets, thereby violating the Government curfews. As the protests over poor governance rages, many public/private properties have been attacked. In several states, the estates of some top politicians have been vandalised.

The unrest took another dimension as Nigerians uncovered the several locations where donations (palliatives) by the private sector coalition against COVID-19, aka CaCOVID, were stacked away. And this appears to be a deliberate attempt by Government officials to violate the initial plan to distribute the palliatives to members of the public.

With an estimated 51% of Nigerians currently living in extreme poverty based on a report the World Data Lab, the publishers of World Poverty Clock, many warehouses with stocks of CaCOVID-supplied palliatives have been attacked/vandalised.

What is the problem?

Over the years, there have been a series of worrying allegations against the various tactical squads of the Nigeria Police, especially the Federal Special Anti-Robbery Squad (FSARS), Special Tactical Squad (STS), Intelligence Response Team (IRT), Anti-Cultism Squad, and many others. The squads, especially SARS have been accused of brutality, including extrajudicial killings.

What, at the beginning, appeared to be a mere protest march on 8 October 2020 by some concerned Nigerians led by Folarin Falana – @falzthebahdguy and Douglas Jack Agu – @iRuntown attracted thousands of people, and continued on a daily basis thereafter with a trending hashtag #EndSARS.

The notorious Police squad, Special Anti-Robbery Squad (SARS) was disbanded. Another another squad named ‘Special Weapons and Tactics’ (SWAT) established as a replacement has been strongly rejected by the #EndSARS movement.

The Government said it accepts the 5 demands of the #EndSARS. The Nigerian Youth express doubt, because they have not observed practical positive changes. 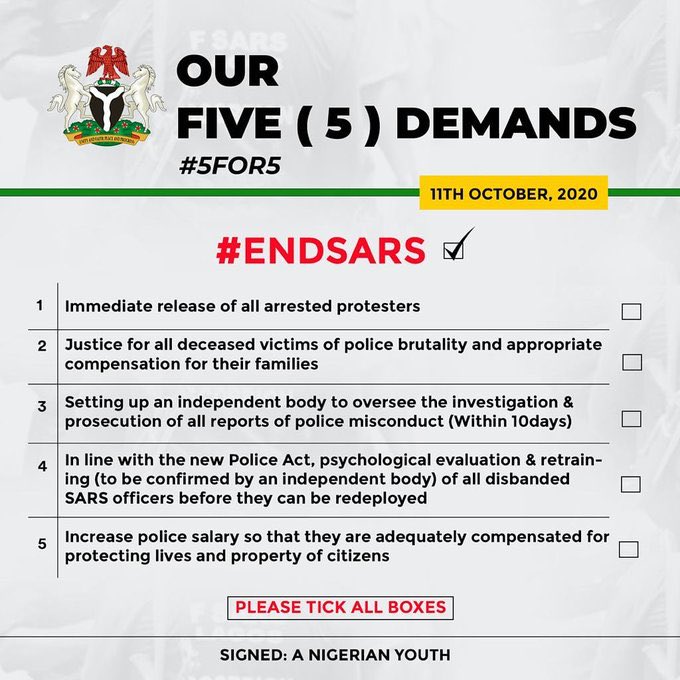 President Buhari address Thursday, which comes 2 weeks after the #EndSARS protest started, was belated and yet failed to douse tensions. Buhari’s speech generated a barrage of scathing criticisms against the Government. The president is accused of issuing threats, and failing to make a reference to the Lekki Massacre.

Buhari did NOT mention Lekki Toll Massacre at all. Not even once.

He stands with the Nigerian Army- it never happened. If you insist it happened, then it was photoshopped.

Nobody shot. Nobody killed. Nobody injured. It never happened. Do your worst.

What a speech. What a man.

Not a word from Buhari @MBuhari about #EndSars protesters killed. Not a word about citizens killed in Zamfara.
You still have doubt that this man cares for no one and everyone is feeling the effect of his incompetence?#EndSars #SecureNorth

“Even vice President @ProfOsinbajo is ashamed of General @MBuhari’s speech. You will notice that 4 hours after the speech, he still has not shared it on Twitter. This is the first time ever. Normally, he would support Buhari by tweeting and retweeting.”#EndSARS