It means 9,134 people have now died from the virus in the country.

Earlier World Health Organization chief Dr Tedros Adhanom Ghebreyesus said a “chronic global shortage” of protective equipment was one of the “most urgent threats” to the ability to save lives.

Italy is the worst-affected in Europe. Almost everything has been closed and people told to stay at home.

Earlier on Friday, authorities warned that restrictions were likely to be extended beyond 3 April.

What is the latest from Italy?

The northern region of Lombardy, the hardest hit in the country, saw a sharp increase in deaths from Covid-19, the disease caused by the virus. This followed a decline on Thursday that had raised hopes the outbreak there could have peaked.

There were 5,959 new cases nationwide – a slightly lower increase than Thursday’s figure. There has been a total of nearly 86,500 confirmed cases in the country. 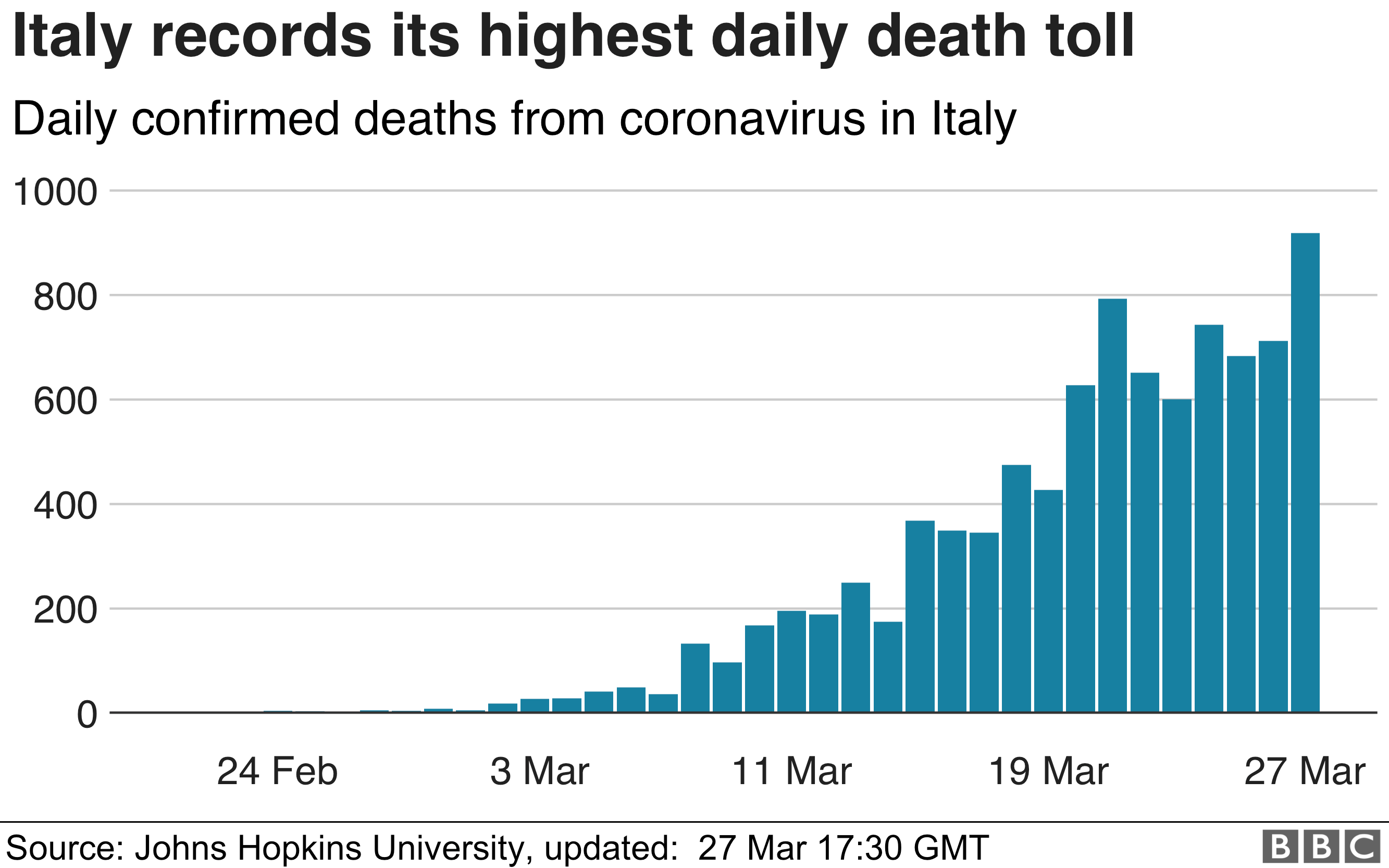 Fears are also growing of an increase in cases in the poorer south of the country.

On Thursday Vincenzo De Luca, president of the Campania region around Naples, said the central government had not provided promised ventilators and other life-saving equipment.

“At this point there is the real prospect that Lombardy’s tragedy is about to become the south’s tragedy,” he said.

The same day Prime Minister Giuseppe Conte said all of Europe would be hit by a severe recession. He promised a second stimulus package for Italy worth at least €25bn (£23bn; $27bn).

Every day is a struggle for Italians to take in the scale of this tragedy. It’s as if the country is losing the population of a village day after day. There have been 541 deaths just in the region of Lombardy in the past 24 hours. It’s staggering.

Although it is hard to see light at the end of the tunnel, there are grounds for it: the new infection rate is declining and the curve is flattening. But more than two weeks into the nationwide lockdown, progress is slow and uneven. And the awful news keeps coming: 46 doctors have now died since the outbreak began.

What’s clear is that the containment measures will have to be extended – possibly for months, says the national health council. That will cause anxiety not just here, where the lockdown is crushing the Italian economy, but around the world, where Italy’s restrictions are a model for many other countries.

Italy is a week or two ahead of most of Europe – both in the progression of the virus and in the lockdown. So what happens here will be closely watched elsewhere.

What is happening in the rest of Europe?

In the UK, Prime Minister Boris Johnson became the first Western leader known to have tested positive for coronavirus. He said he had developed only “mild symptoms” and was self-isolating in Downing Street. He said he would “continue to lead the government’s response via video-conference as we fight this virus”.

Spain – Europe’s second worst-hit country – has seen a sharp rise in the number of deaths but the rate of new infections was stabilising, officials said. Confirmed cases rose to 64,059, a 14% increase compared with 18% a day earlier and 20% on Wednesday.

In 24 hours, 769 people died, a daily record, taking the total to 4,858. The Spanish government has extended the state of emergency until at least 12 April.

People’s movement are severely restricted and most shops and businesses closed.

On Friday France reported 299 coronavirus deaths over the past 24 hours – fewer than the previous daily count.

The total death toll from the virus in the country stands at 1,995. Almost 33,000 people have tested positive.

Also on Friday, French Prime Minister Édouard Philippe announced that people would have to stay at home until 15 April at the earliest, extending the initial confinement order by two weeks.

What about the rest of the world?

The US became the country with the largest number of confirmed cases, with more than 100,000 positive tests recorded on Friday. Some 1,300 people have died nationwide from Covid-19. On Thursday, President Donald Trump said his team plans to release federal social distancing guidelines that may advise some regions to loosen restrictions
New York City is the current coronavirus epicentre in the US but there were signs the disease was rapidly spreading in New Orleans, Chicago and Detroit, where the mayor described the situation as “really concerning”

China, where the outbreak began in December, announced a temporary ban on all foreign visitors, even if they have visas or residence permits. There have been 3,292 deaths and 81,340 confirmed cases in the country, and the majority of recent new cases have come from abroad

According to a tally by Johns Hopkins University, there were more than 540,000 confirmed cases of coronavirus around the world and 24,000 deaths. Some 124,000 people have recovered