BBC: The Brexit Party was the clear winner in the UK’s European elections, with the pro-EU Lib Dems coming second.

The Conservatives and Labour suffered heavy losses, with the former expected to get less than 10% of the vote.

Brexit Party leader Nigel Farage said he was ready to “take on” the Tories and Labour in a general election.

Mr Farage told BBC Radio 4’s Today programme: “With a big, simple message – which is we’ve been badly let down by two parties who have broken their promises – we have topped the poll in a fairly dramatic style.

“The two party system now serves nothing but itself. I think they are an obstruction to the modernising of politics… and we are going to take them on.”

The deputy leader of the pro-Remain Liberal Democrats, Jo Swinson, said the result should “give hope to all of the people out of there who want to stop Brexit”, and that they “should not be giving up without a fight”.

“When there is such a general shambles over Brexit, then [a further referendum] is the best way out of the impasse,” she told Today.

Prime Minister Theresa May tried three times to secure MPs’ backing for her Brexit plan and resigned as prime minister after her fourth attempt prompted a big backlash.

She tweeted disappointment about the result for the Conservatives.

A very disappointing night for @Conservatives. Some excellent MEPs have lost their seats, some excellent candidates missed out. But Labour have also suffered big losses. It shows the importance of finding a Brexit deal, and I sincerely hope these results focus minds in Parliament

All 28 EU member states are electing MEPs to the European Parliament – the EU’s law-making body. Overall, the big centre-right and centre-left blocs lost ground, amid a surge in support for liberals, Greens and nationalists.

The UK had been due to leave the EU on 29 March, but when that deadline was missed, participation in the election became mandatory.

The Brexit Party topped the polls in every region of England apart from London. It also dominated in Wales, with Plaid Cymru second.

It has now become the joint largest national party in the European Parliament, alongside Germany’s CDU/CSU party.

In Scotland, the pro-Remain SNP won the biggest share of the vote, with just under 38%, giving it three MEPs.

The Brexit Party came in second place with a significantly lower percentage – 14.8% – followed by the Lib Dems with 13.9% and the Tories with 11.6% – meaning each party has one seat.

But Labour only received 9.3% of the vote – a loss in vote share of 16.6% – leaving it with no MEPs in Scotland for the first time.

Meanwhile, Northern Ireland’s count does not begin until Monday, with the results expected on Tuesday. 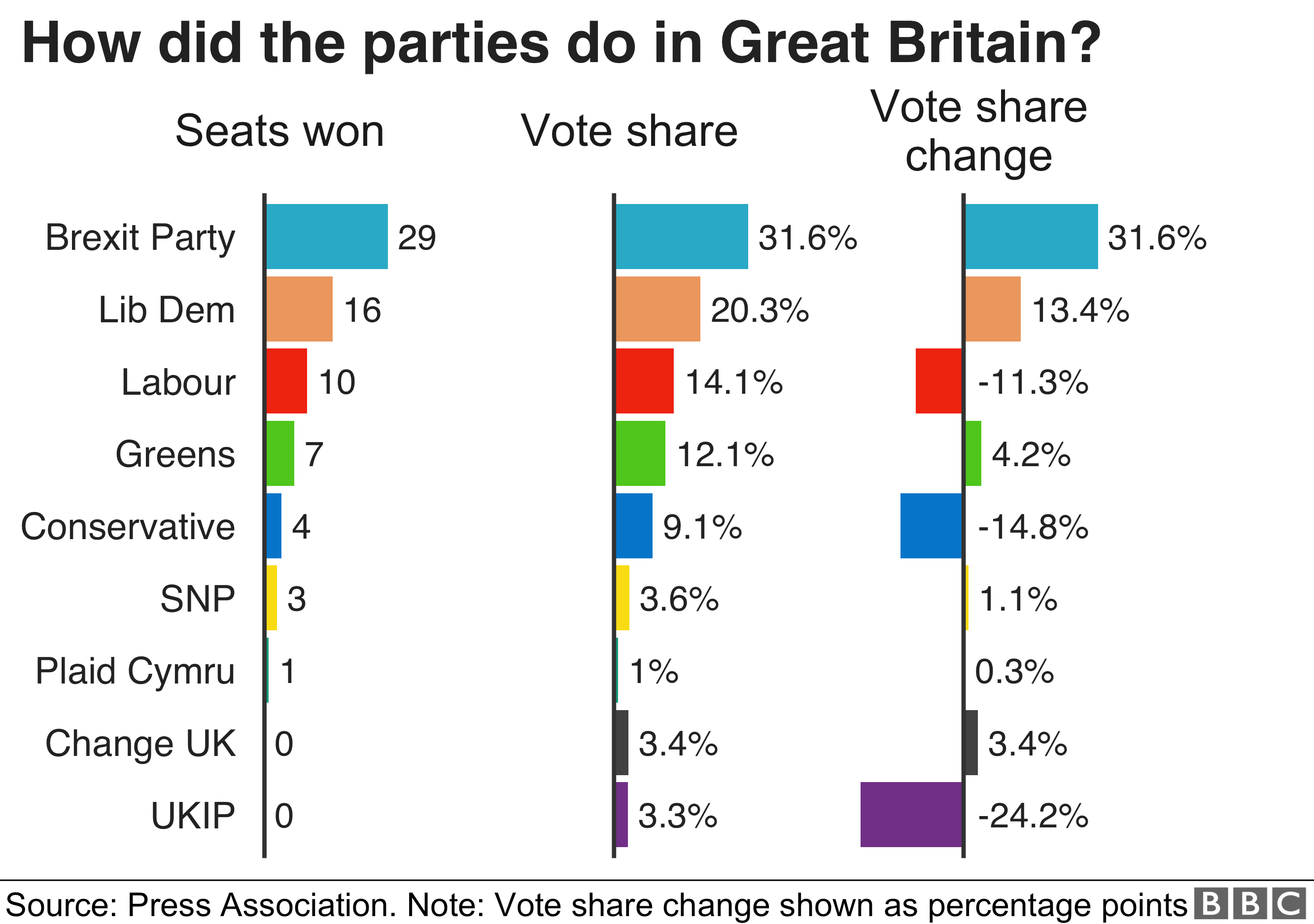 The night at a glance

Brexiteer and Conservative MEP for the South East Daniel Hannan – one of only three Tory MEPs elected – said it was his party’s “worst ever result”.

Tory leadership hopeful and former Foreign Secretary Boris Johnson said the public had delivered “a crushing rebuke” to both major parties for failing to deliver Brexit.

Prominent Brexiteer and Tory backbencher Steve Baker said his party faced “obliteration” if they did not get on with leaving the EU as they had pledged.

He told BBC Breakfast: “It is a grave time for our party and country, [but] I am not surprised that [the result] is as bad as it is. You just can’t break promises you have made like this and expect to go unpunished.”

Labour leader Jeremy Corbyn is facing increasing pressure from senior members of his party to back another referendum on Brexit, with his own shadow chancellor saying it is the only way through the deadlock.

“Of course we want a general election,” he said. “But realistically, after last night, there aren’t many Tory MPs who will vote for an election, it will be like turkeys voting for Christmas.

“If there can be a deal, great, but it needs to go back to the people. If it’s a no-deal, we’ve got to block it and the one way of doing that is going back to the people and arguing the case against it because it could be catastrophic for our economy.”

Labour’s deputy leader Tom Watson said the party needed to “urgently” rethink its Brexit position after the “disastrous” election results, while Emily Thornberry told the BBC that the party should call for another vote and campaign to remain.

But the leader of the Unite Union, Len McCluskey, said Labour’s attempt to “unite the nation” over Brexit was “an honourable objective that must not be abandoned”.

He added: “This is the time to hold our nerve because the true prize is the very real possibility of a looming general election.”

Mr Corbyn told the BBC: “What you have from me today is a commitment that our party is listening to its members and its supporters, and reaching out to parties across the House of Commons to prevent a crashing out… with no deal.

“A commitment that the future will of course be put to a public vote, as we have proposed in Parliament.

“Any final deal has to be put to a public vote and that we are prepared to do.”

In contrast to the two biggest parties, some of the smaller ones with an unambiguous message on Brexit were rewarded.

Anti-Brexit parties – those in favour of another referendum – collectively took about 40% of the vote, compared with 35% for the two parties in favour of leaving the EU without a deal. 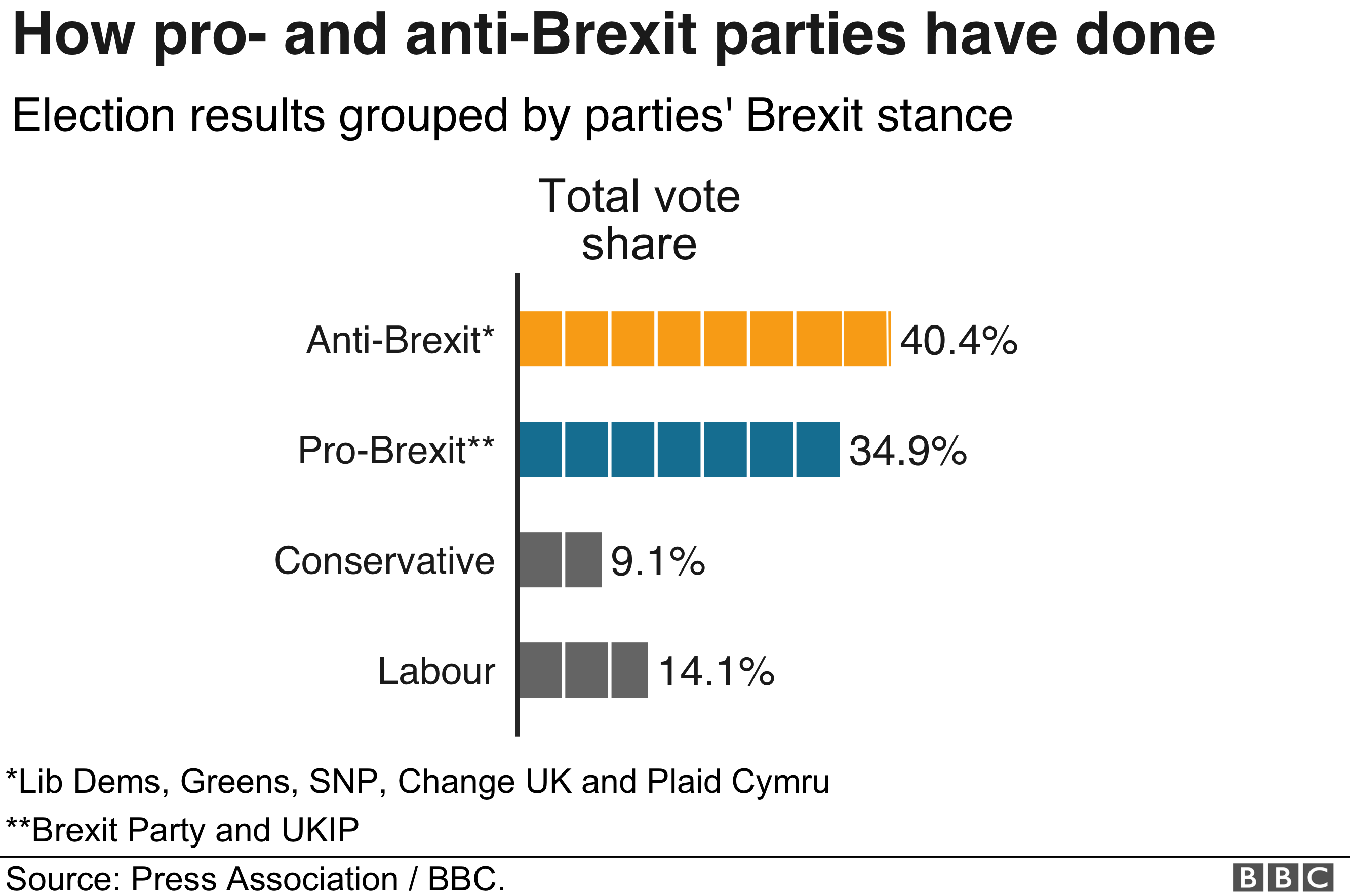 Green Party co-leader Sian Berry said the case for a further referendum was stronger than ever, adding: “Giving the people the final say over the country’s direction is now clearly the only way forward, the way to draw a line under the Brexit chaos.”

Change UK failed to win any seats in the election, but leader Heidi Allen told the BBC her party – newly formed from ex-Labour and Tory MPs – was “down, but we are not out”.

Meanwhile, UKIP lost all its MEPs in the election, and saw a fall in its vote share of over 24%.

The party’s former deputy leader, Mike Hookem – who lost his seat in Yorkshire and the Humber – blamed UKIP leader Gerard Batten for the result.