Unic Press UK: Five of the gubernatorial aspirants of the All Progressives Congress (APC) in Imo state have urged the National Working Committee (NWC) of the APC to uphold the election of Hope Uzodinma as the party’s flag-bearer in the light of the primary election result, which was announced by the Ahmed Gulak 2018 Governorship Primary Election Committee. 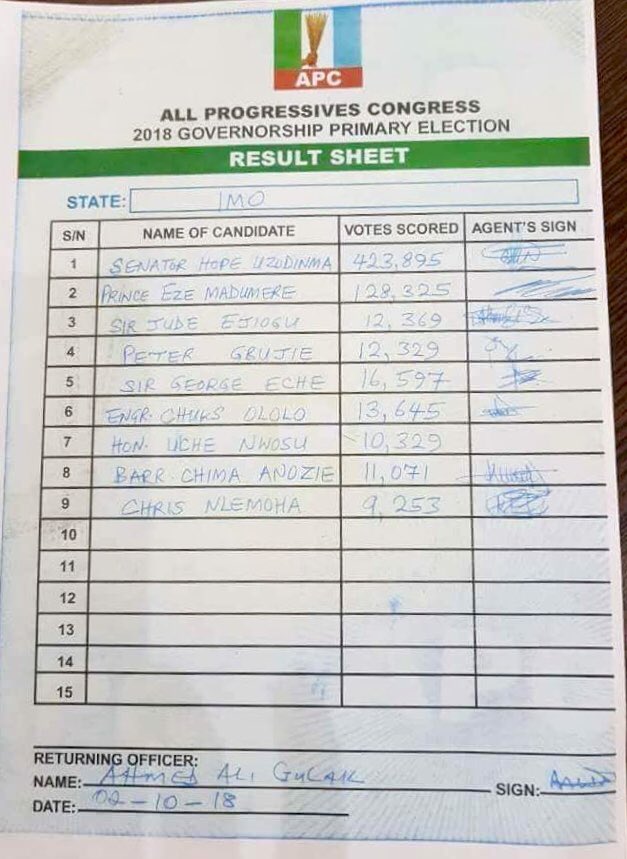 Reacting to the party’s National Working Committee rejection of the primary election result, five of the aspirants has called on the APC leadership to accept the verdict of the Imo people, who have chosen Hope Uzodinma as the governorship candidate of the party, or risk losing the Imo state 2019 gubernatorial election.

In a communique read by one of the aspirants and the current Deputy Governor of Imo state, Eze Madumere, during a news conference Friday in Abuja, the aspirants dissociated from any arrangement of the party’s NWC to conduct a fresh gubernatorial primary election in Imo.

The five aspirants said that the initial primary election, which was held on 1st October 2018 in the 305 electoral wards of the 27 local government areas of Imo state, was conclusive and authentic as declared by the chairman of the Imo state 2018 Governorship Primary Election Committee, Ahmed Gulak.

The aspirants said there is a subsisting interlocutory injunction of a court of law, which orders the All Progressives Congress (APC) not to conduct a fresh gubernatorial primary in Imo state.